As part of the BBC Abolition season in 2007, Genevieve Tudor's Sunday Folk (BBC Shropshire) commissioned a specially recorded radio version of the New Scorpion Band's Sound the Jubilee - music and readings from the history of slavery. We can now stream this for you. 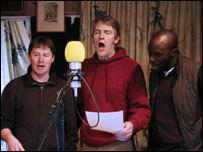 Tim, Robert and Tas in the studio

The cast of Sound the Jubilee is: Tim Laycock, Robin Jeffrey, Sharon Lindo, Robert White and Brian Gulland of the New Scorpion Band with actor Tas Emiabata as the voice of Olaudah Equiano. The script was widen by Tim Laycock and Robin Jeffrey and The recording was produced by Satch Norton and Robert White.

The New Scorpion Band's first thoughts of a slavery programme began to take shape after a concert in Lancaster's Roman Catholic cathedral at Christmas 2006. 2007 was to be the 200th anniversary of the abolition of slavery so could the band do something in the cathedral to commemorate the event?

Tim Laycock: "We set about looking around to see what actually existed in terms of songs about the subject of slavery– in particular the journey the slaves took from Africa across to the West Indies and to America." Particularly useful in research was historian and folklorist Roy Palmer who had written on the subject of slavery and traditional music.

The song that struck Tim straight away was Flying Cloud. "A tremendous ballad. I think I first heard Louis Killen singing it." The song is in two sections. The first describes the process of the slave ships going over to the west coast of Africa, taking slaves on board and carrying them over to the West Indies. Often fever or plague would come on board, and if they died, the slaves would be thrown overboard. They were just regarded as human cargo. That ballad was really the starting point. 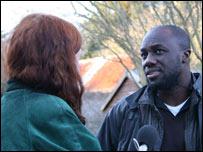 As the band began to read into the subject, they found diaries from people such as John Newton, author of Amazing Grace. The song is known all over the world, but what many people don't know is that for the first 30 years of his life, Newton was involved in the slave trade. He was captain on three slaving ships that sailed from the port of Liverpool to Africa to the Caribbean.

Tim quotes from memory from Newton's diary: "When I was doing this in the 1750s, I didn't think there was anything wrong with it. I didn't like the job, I thought it was a disagreeable way to make a living, but I didn't actually believe there was anything immoral in it.”

Then later on in life, Newton gave up the sea and began to think deeply about what he'd been involved in, he then realised what he'd been involved in was morally indefensible, so he became one of the leading figures in a campaign that began, in the 1760s and gathered strength toward the end of the century, this was a campaign to abolish the slave trade. What they wanted to abolish was slavery completely, but the first step was to put a stop to the slave trade in the British Empire.

"John Newton became one of the leading abolitionists, so it seemed to me that his personal journey from being a slave captain to becoming somebody who was opposed to it and helped to abolish it was really what our programme should be all about.”

So the plan of attack for the New Scorpion Band was to research the history and to find more songs and music. The programme took on the title Sound the Jubilee.

The story that emerged from the research condensed into two threads:
the story of John Newton himself, and the story of an African who was enslaved and taken to the West Indies, later taken to America and then came to England. His name was Olaudah Equiano.

Equiano wrote a book called The Interesting Narrative, about his experiences as a slave. In Sound the Jubilee, in Equiano’s own words the listener gets a first hand account of what it was like to be on one of those ships going across from Africa to the Caribbean – what it was like being sold into slavery, what conditions were like in the plantations.

It's a dramatic story, but it's also a story that has extraordinary significance for the following two hundred years, because if this hadn't happened, if those 10 million Africans hadn't been taken from Africa to the West Indies and America, the whole shape of American history, African history, European history would be different.

The historical story in itself was enough to engage and fascinate the band, but there was another facet that grabbed their attention was the way in which European music and African music began to meet.

One of the ways in which the enslaved people were able to keep contact with their own culture was through their music, their stories and their dance, but they were also very quick taking things from European traditions as well. So there was a blending of British folk music (and French and other European music), with African music in the Caribbean, being a great melting pot of styles.

One of the things the band become interested in is quadrille music, which is sets of tunes that come from British folk tradition but in the Caribbean setting they've been given African and West Indian rhythms to go with them, (this can be heard in Alan Lomax’s audio collections from the 50s)so you get this most incredible sound: jigs and hornpipes with African music going on underneath. That's been one of the really exciting things that we've acquired from this whole project. Something that gave rise to reggae and ska music.

Another rich vein is the work song: One of the shanties we perform is a called Essequibo River, and that seems to be one of the shanties that's most easily traced back to first of all a West Indian work song or a Guyanan work song, the style of which almost certainly coming from Africa. 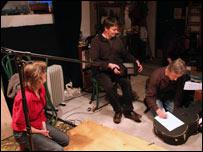 The structure of the song is typical of a work song, with the call: 'Essequibo River is the queen of rivers all', and then the response: 'Buddy ta na na we are somebody oh'.

That rhythm, that call and response, is typical of work songs of particularly West Africa. Those songs that were used in Guyana, on the islands for any kind of moving task were then taken off to sea and adapted by shantymen, many of whom came from the West Indies. Another example of how these songs were blended, adapted and kept alive.

Sound the Jubilee had its live premiere in St Peter's Cathedral, Lancaster on Saturday 24 March 2007.

You will hear stories from the time, prior to the abolition at the end of the 18th century and accounts of the movement to try to get the slave trade abolished, interlaced with songs and music from the time, and all sorts of other little snippets of information that help convey the whole story.